Tom Nevill, 29, is studying an apprenticeship degree in Business Management and Social Change

He suffers from PTSD following the death of his father when he was 12. Tom uses running as a coping mechanism, so when he found himself unable to run due to physical effects of PTSD he struggled to cope. Talking about his problems helped him on a road to recovery. Here he shares his story.

“I lost my father when I was 12 after he was diagnosed with stage 4 terminal brain cancer in 2000. He was given six months to live and after he passed away in 2003, I experienced PTSD as a result. It’s something I live with every day. I love running and when I’ve struggled with my mental health in the past, it’s been the thing that’s helped me focus and cope with my anxiety.

“Running has always been part of my life, but my PTSD has caused some physical health problems in the past, which meant that I wasn’t able to run. This led to a decline in my  mental health, and I found myself struggling to cope.

“At the time, and it sounds so simple, talking to someone about how I was feeling really helped. PTSD is an ongoing battle, but I rebuilt my physical and mental health and decided to train for a marathon. When I found myself in lockdown and I realised that I would not be running a marathon any time soon, I knew it was time to ramp my training up and use my running to help with my mental health." 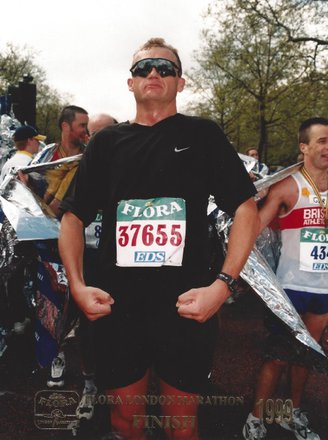 My dad was always a keen runner, and he ran every morning before work as he loved keeping fit.

Tom's memories of his dad (pictured)

“He ran a lot of marathons and achieved his PB at the 1999 London Marathon, which is remarkable considering he could have possibly been in the early stages of cancer.

“My dad has inspired me to run which has really helped me over the years, but particularly the last few months as I took on Samarathon in July. I decided that instead of running one marathon distance, I would do the equivalent of ten, so a total of 262 miles. I used this focus to get me through lockdown and the training helped with getting my time down, as I really want to be fit enough to beat my dad’s marathon PB of three hours and twenty-six minutes when I get the chance to run the marathon.

"My advice to other men who are struggling is that talking to people around you genuinely helps. The release of getting it out and off your chest is often all you need, which is why Samaritans is such a great service as they are there to listen.

"I met Resilience Coach, Josh Connolly through a family friend and could relate to him as we’d had a similar experience of substance abuse. I found support in someone who had also lost his father when he was young. We had had a similar experience of spending a lot of our lives putting on a tough guy front, but that’s not sustainable. We spoke a lot about how we had developed coping mechanisms to deal with our anxiety and I learnt how to be kinder to myself.” 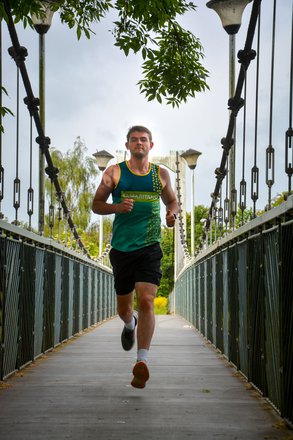 It was a huge help for me to talk to someone about how I was feeling.