Steven became a Samaritans volunteer after calling the charity after attempting to take his own life following a difficult period. Steven explained there wasn’t one single factor but a combination of things that led him to reach a crisis point including relationship breakdown, challenges with his physical health and losing his best friend to suicide.

"My journey with mental health has spanned the majority of my life, but I didn’t recognise I was struggling for a long time. And even then, I didn’t want to admit it. It wasn’t till I reached a crisis point where I tried to take my own life, that I reached out.

"There wasn’t any one thing that caused me to reach that point; it was more the culmination of things over time that made my life feel more and more out of control. People’s behaviour towards me, relationship breakdown, problems with my health and losing my best friend to suicide, all built up to the point where I couldn’t see a way through.

"It was then that I decided to call Samaritans; I wasn’t sure that phoning and speaking to anyone would actually help. At that point I really did feel hopeless; the only option I could see was taking my own life, but I decided to call and speak to someone. When someone picked up I got nervous.; I wasn’t sure what to say and it felt like I was silent for minutes just trying to find the words.

"But the volunteer on the other end of the line stayed with me; he didn’t rush me. Instead he encouraged me to just start by talking about anything, even a little small talk. He put me at ease and made me feel like I was worth listening to.

"As I talked things through I started to realise that I didn’t want to die; I wanted to live in a different way. And that was really powerful. 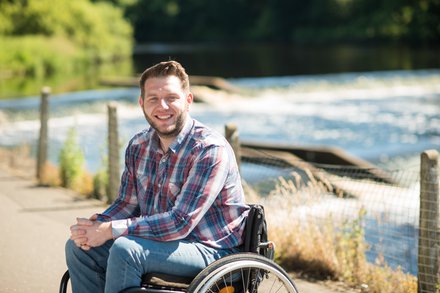 I really believe that the fact that I’m alive today is thanks to that call.

"It’s not that one phone call magically fixed everything - the problems were still there - but it was a turning point. And since then, I’ve been able to build the sort of life that would have seemed impossible to me at that low point. I’m in a happy relationship and a loving family. I know how important it is to look after my mental health and that I’m worth that effort. And I’m trying to use my experience to encourage others to reach out and ask for help if they’re struggling.

"I owe so much to the Samaritans and I really wanted to give something back. I ran a boxing fundraiser at my local gym, and raised nearly £2,000 for my local Samaritans branch and went onto become a support volunteer there too. And later this year, I’m planning to start training to become a listening volunteer.

"I hope that I’ll be able to do for someone else, what the Samaritans did for me. To show someone that, no matter what you’re facing, you’re not alone. There’s always someone there to listen and help you find your way through."