"Early on in my career, I started having some difficulties at work. There was a personality clash between me and some of my colleagues. I don’t think I was what they expected, as I took over from someone else. Over time, this got me down. For a spell in my mid-20s, I couldn’t face going in to work. I went missing from work a couple of times for a week at a time. After that, I would go through phases of being ok and then I would get myself into quite a depressive state.

"I moved away from London and got myself together, I was doing quite well until I got into some financial trouble. I sort of hid it from myself as much as anyone else, but then I just got in deeper and deeper. I was dealing with a couple of personal issues and work was not going so well, eventually I dug myself in to a hole.

"One Sunday morning in 2012, I had enough. I set off to where I planned to take my own life, but suddenly when I was standing there, I had a moment of clarity. I asked myself what am I doing?

"After that I realised that I needed to do something. I had a bit of counselling in the past and I spoke to a mate of mine who had suffered and encouraged me to speak to a doctor. My boss pulled me aside and advised that they felt my work was being affected. I eventually went to a different doctor who recommended CBT. This helped me understand how I was feeling and gave me tools to ease how I was feeling and what I could do to get it out my life."

"As a Crystal Palace Fan, I’ve recently been to a couple of Walk and Talks – a series created by fans with a passion for better mental health and supported by the Samaritans – where football supporters get together before the match to chat and walk to the stadium. At the first one I talked to a few people and I started to open up as a result of going to these.

"I hadn’t spoken to Samaritans before the Walk and Talk, but I found it really helpful to actually have someone in front of you – engaging with you and getting feedback from what you are saying. There’s still a bit of stigma around talking. For me, talking to someone in person was better. CBT gave an option to do it online at home or go to a group, but I needed the group and to have a set time, as it would stop me putting it off and saying I’ll do it tomorrow.

"Another huge thing for me is exercise. It clears my head and is a stress relief. If I’ve had a bad day, I go home and put on my trainers or jump on a bike. It just gives me some peace in being able to step back from it all. I started doing triathlons and found the intensity of them gives me focus to keep exercising. If I’ve got something to aim for, it helps me keep myself on track.

"My doctor was helpful, but I found speaking to Samaritans’ volunteers to be more supportive as they’d had experience with dealing with similar issues in the past, which meant that they knew where I was coming from. Doctors can seem quite clinical about it all.

"After the Walk and Talk, I felt like it would be good to tell my story, if it can be of help to anybody. Just to show people out there that there are others with the same issues and that they can be overcome. If I had to give any advice it would be to see it day to day really." 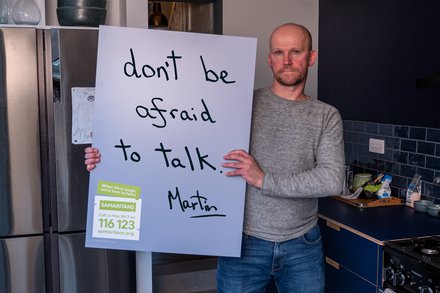 You don’t see a way out and you might think you are stuck like that forever but if you can take it day by day, it does improve.

What message would you have to men who are struggling?

"Don’t be afraid to talk to people. There are people who are willing to listen and it does make a difference. Just to put it down on paper or talk about it – it helps you to get it out in the open."

What advice would you have to encourage someone to contact Samaritans?

What do you recommend to get back on track?

"When I was struggling, it helped me to know that there were people I could contact to talk and there were tools that I could use to get rid of those negative thoughts from my head."