Damon has been a dedicated Samaritans volunteer at Stafford branch since 2017. When doing outreach work with his branch, Damon made an intervention and helped a man at a train station.

“I don’t think there’s many parts of the Samaritans’ branch that I haven’t been part of – it’s a privilege. I’m heavily involved in our outreach work – we go to all areas of the community to let them know they can come and talk to us. I also run the rail programme that we do in branch and there was a time last summer when I was able to help someone who was absolutely at the end of their tether.

“I noticed him as he wandered in off the platform and onto the concourse – he looked distant and was almost wandering around like a little lost child. I might be a big bloke, but I’ve got a soft heart and I just wanted to run over and hug him and say “whatever you’re going through, let’s help you out.” I went over to him and just said, “all right chap, how are you? Are you doing okay?” and I was just trying to break him out of his daze to get him talking to me. 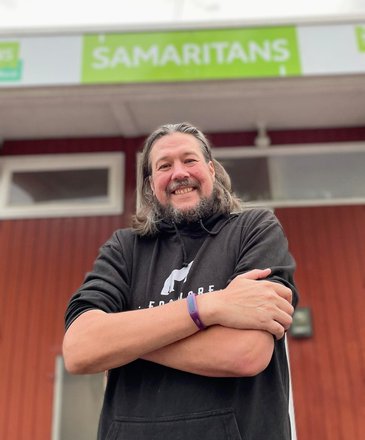 He went away smiling and it was a moment that I’ll never forget.

“The conversation progressed, and he told me he’d recently lost his long-term partner and riding the railway was something they used to do together. He was getting more and more teary as he was talking things through and said he’d not been able to get the support he needed – you could just tell he’d been building up to take his life. I spent about 15 minutes with him until I got him to a point where I felt safe to let him leave and I gave him a Samaritans contact card. He went away smiling and it was a moment that I’ll never forget.

“My personal experience has made me more likely to help someone in that situation, but everyone has the ability to talk and look out for others. I lost my cousin to suicide and it’s one of the reasons I joined Samaritans. It was one of those things that pushed me on to try and find the tools I needed to notice and be there for such people. I think I’m a naturally compassionate person anyway and I’ve always been the kind of person to step in if I could. To anyone who needs encouragement – I'd say try and forget that you’re a little bit nervous; keep trying because if it’s the one person in your whole life that you reach out to, then that’s made a world of difference to one person.

We have to push ourselves forward and keep trying to get that communication skillset back – talking is so important.

“I can understand as we come out of the pandemic and restrictions ease why some people might be nervous to talk to people and build those small talk skills again. A few years ago, after a lot of pain in my back and shoulders, a few operations, my spine actually collapsed and I spent a lot of time at home, lying on the sofa on medication and couldn’t work anymore. It got to the point where I became housebound and almost agoraphobic. When my spine had healed, I knew I had to get back out into the world and that was another reason I got involved with Samaritans. We have to push ourselves forward and keep trying to get that communication skillset back – talking is so important.”

If you feel something isn’t quite right and you think someone might need help, trust your instincts and start a conversation. You could save a life.

How to start a conversation with somebody who needs help

After a year of restrictions it's normal to feel anxious about making small talk, but having the confidence to act could save a life.

During a return trip to university, a woman approached Dom and asked if he was okay. Her kindness was enough to interrupt his thoughts and now Dom is able to look out for others who may need help.