Michael lives in Harrogate and works in the agricultural industry.

“I attempted to take my own life – I shouldn’t be here this morning. It was three years ago and feels like a distant dream to me now. As I was approaching 50 six years ago, I started to feel anxious. It was a funny place to be, you start thinking that nobody cares. I felt isolated, I felt alone. At the time, people had started to notice something wasn’t quite right with me. My children would ask ‘what’s up, you’re not your normal self Dad?’

“After attempting to take my own life, I reached out for help. The doctor I saw really helped me and put in the right direction. So far, it’s worked. My ex-wife will often refer to ‘old Michael’ and that makes me remember how much has changed for me in the last six years or so. I’ve really been through the mill. I feel a lot calmer in general these days – the anxiety has gone.

“To anyone that’s struggling with their mental health, I’d say the bravest thing you can do is talk.” 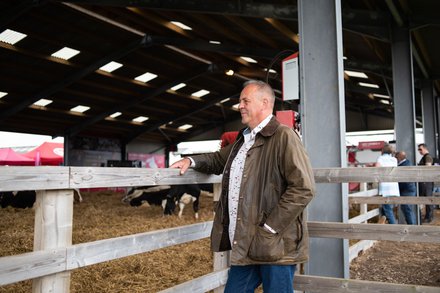 I think you’ve got to talk before you get to a point of no return.

“I think, living in the rural community, there is isolation, there’s no two ways about it. There’s guys out there on farms that probably don’t see anybody different for weeks at a time, possibly.

“And the remoteness, you don’t get out, all your works at home, which if you’re not in that environment, it’s difficult to understand. You’re not going out the door and driving for half an hour, an hour, to work. You walk out the door and you’re straight into work.

“You don’t see anybody new, you don’t see any fresh faces, you don’t get to know what’s going on. I mean the rural community is fantastic when they get together, but they don’t get together very often. Problems do come, and yeah you can try talk it out with your partner, but sometimes you need somebody that’s got a different perspective on things. And that’s difficult because you’re not coming across people to talk to.

“I think speaking to men, especially in rural communities, it’s probably the only way that blokes like me will actually talk. Knowing Samaritans are there, that’s your first step. You know they’re going to listen and point you in the right direction.”

How Samaritans is encouraging men in rural communities to seek support

Real People, Real Stories aims to reach men who are struggling to cope, especially those who live in rural communities.