Ricky has been a Listener in Brixton Prison for 2 years; he says it changed his life.

Following an increase in the number of suicides in prisons during the 1980s, the first Listener scheme was introduced at HMP Swansea in 1991. Now, there are Listeners in almost every prison in the UK and the Republic of Ireland. Typically, 1,500 Listeners respond to over 50,000 requests for support every year. 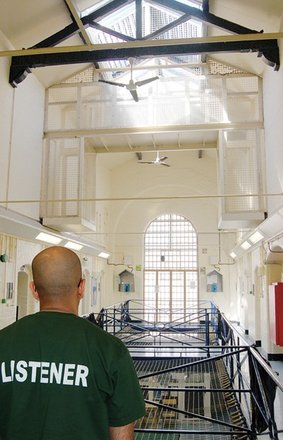 Samaritans have given me hope. The way I look at life now, I can’t wait. I have so much to look forward to. I want to be the new me.

Samaritans train people in prison to be Listeners, here’s why.

As the External Relations Lead for Central London Samaritans, I often tell people about the extensive outreach support we offer Londoners in addition to our 24-hour helpline, in-branch visits, email and webchat. It’s an impressive list – but reciting it doesn’t relay the impact of what we do.

The role of a Samaritan is to provide emotional support to anyone who is struggling to cope, emotionally distressed or in suicidal crisis. We receive a substantial volume of calls and letters from people in prison, but nothing quite beats real-life human contact, particularly when you are living in isolation, away from all that you know and love. We train carefully selected people in prison to become Listeners for their peers in a bid to alleviate emotional trauma and loneliness and reduce incidents of self-harm and suicide. I wanted to know how and why it works, from someone on the inside.

Brixton Prison opened in 1820 and has been everything from a women’s correctional facility to a military prison. It’s a Category C prison for men now – and Ricky is on his way out. Ignoring the wire curls on the tops of the walls, you could mistake it for a very large, very retro school. If I’d known about the penal treadmill, I would have looked out for the footings which are apparently still there. No sign of where executions took place which is a relief.

When we find Ricky, he is in the middle of painting a room in the induction suite; he apologises for the paint fumes and takes us to another room which he’s recently finished and gets me a nicer chair than the bench that’s nailed to the floor. He’s nervous but I am too and we once we both admit it, we just get talking. Within minutes, I feel like I’m catching up with a friendly neighbour. He’s sincere, open and full of emotion.

When Ricky was arrested, he was initially taken to Belmarsh.

I was scared and felt very isolated; I didn’t know the first thing about prison life. I wondered how I would ever make it through my time there.

Ricky was introduced to a Listener who helped ease him in and shift so much of that initial shock and fear. And it was this experience of having someone to talk to in one of the most difficult transitions of his life that inspired him to want to become a Listener himself and support others in the same way.

Ricky found the training difficult because he experiences anxiety.

Ricky became a Listener in February 2020. Listeners are trained by Samaritans volunteers for three full days. There’s a lot of information to absorb in a relatively short period of time. And not everyone can do it; as with any Samaritan, you must be non-judgemental and, as tempting as it may be, you can’t give advice.

“It was like X-Factor getting through. All I wanted was to get the role. I wanted to do well though, so I put pressure on myself. It was intense, but it was all useful. I learned a new dialogue and tone. It meant so much to me that it was quite emotionally draining. I’d walk away from the training thinking of all the things I could have said or done better.”

Being a Listener in prison is a different situation to other Samaritans where, for the most part, the call is with an anonymous person down the end of a phone. Here, you’ll see people around. Understandably, it takes time to build a rapport with someone before they fully open up. Ricky starts by having a chat to put the person at ease; he tells them how long he has been a Listener which helps. “Confidentiality and trust are important. They need to know you’re not going to share their story with anyone else.”

I’m surprised by just how many ‘calls’ Listeners take (calls in this case are actually face-to-face contacts). Calls are arranged through the Prison Officers and Listeners go out in pairs, on a rota. Listeners take 4/5 calls day and night; 20-30 calls a week. It seems like a lot. “Everyone is on a journey, whether it be mixed up in gangs or drugs or something else – and everyone is from a difficult environment.” Covid has been particularly tough, people in prison spent a lot more time in isolation during lockdown.

I wondered what the people Ricky is in prison with would have to say about having someone on call to talk to.

Honestly, sometimes people just want to call on me because they want to get out of their cell. But when someone genuinely needs to talk, they appreciate it, they value the Listener scheme and people express their gratitude. People don’t know how difficult it is in here. Some people are not strong enough. I’ve done the best I can and gone above and beyond to show people it’s worth doing. You don’t get paid. You’re just there to help people get through their journey in prison. You’re not on your own.

The value of debriefing

Samaritans volunteers visit Brixton every week to check in with the Listeners and give them the opportunity to talk about their more difficult calls. Ricky doesn’t receive any of his own visitors so Samaritans coming in has an enormous impact – and he’s been able to talk to them about himself. I wondered how many opportunities he had to do this before Brixton. “The support Samaritans volunteers gives us is so important. I couldn’t appreciate it more. Due to confidentiality, you can’t talk to anyone here in prison. Seeing Samaritans is like seeing a friend.”

I asked Ricky about the most difficult part of being a Listener. He’s quiet for a moment and says there are two things, which kind of turn out to be more than that. “Some days are overwhelming. You see someone in real distress and as a human, you feel like you can do more to help. Seeing someone who has been self-harming or self-medicating is hard. Not being able to give pro-active advice is hard, but ultimately, you don’t want to put a thought into their minds and make it worse. And going by a rota is difficult, you feel like you’re letting people down if all they want is to see you and not someone else.”

I know there’s more, so I gently probe. This is a man who has had the benefit of spending time with Samaritans so he’s even comfortable talking about the really hard stuff.

It's difficult when someone talks about suicide because I was in that position. I thought there was no way out of it. It takes me back to the time when I felt like that. But I’ve had the opportunity to talk to the team when I’ve needed to and that helps. You just want to check in more and make sure people are okay when they’re in that place.

The benefits aren’t just for the callers

Ricky had a tough time before coming into prison and was in a vulnerable state; he was overwhelmed by negativity, he had suicidal thoughts and simply wanted to give up. Ricky was then arrested and felt such shame and embarrassment about being in prison. It’s pretty obvious that Ricky has gained so much from being both a Listener and being listened to by Samaritans volunteers, but I want to hear it from him.

“Being a Listener has helped with my own mental health and being able to put thoughts and feelings into words and communicate them.” He then thinks about his answer and is very honest. “I wasn’t a helpful person; I was selfish, I was judging others. I had a lot of anger and frustration about how people had treated me. I had this attitude of it’s me against the rest of the world. I didn’t feel like I was good enough. Doing this made me realise you never know what someone is going through behind closed doors. I appreciate people so much more now. I appreciate myself more too, and I feel proud of myself as a person. It made me a better person.”

Ricky tells me that being a Listener has also made him feel like he is part of a team. He’s very proud to wear the t-shirt.

I wouldn’t be where I am now if it hadn’t been for Samaritans coming. I’ll be a stronger person coming out of here. Samaritans have given me hope. The way I look at life now, I can’t wait. I have so much to look forward to. I want to be the new me. Samaritans have helped me and so many people.

Ricky becomes emotional and I do too. Our Samaritans Deputy Director for Prisons (a volunteer) is sitting in the room, hearing all of this and I’m just thinking, wow, if you didn’t know the value of your commitment before, you definitely should now. Ricky has more to say though, the floodgates are open.

“It’s a massive achievement from where I was to where I am now. People gravitate towards me now. And people want to put themselves forward because of what I’m doing, so it’s like the gift that keeps on giving. If I can do something that makes people feel more confident and more comfortable then I’m doing what I’ve been trained to do.”

My allotted time has long passed, but I want to hear more, and Ricky has one more thing to say. “It’s saved me. It’s given me a fresh start. It’s not just a t-shirt, it helped me turn a corner. My success is through being a Samaritans Listener. I can press the restart button when I get out of here, and I won’t be coming back that’s for sure.”

Ricky never got to thank that Listener he met in Belmarsh, but he wishes he did.

*The man in the picture is not Ricky

Our branch plays an active role in the local community. We reach out to those who need us so that people know who we are and what we do – and how to contact us when they need us.