More and more people would rather type than talk. That’s why we need to roll out our new online chat service across our branches and gradually scale up the service until it’s available 24/7, 365 days a year.

Aged 8, Lisa suffered a head injury which left her with a debilitating stammer that had life-changing effects. She was bullied at school and left aged 15, seeking work as a typist as she believed it meant she wouldn't have to talk much. Afraid to talk, Lisa relied on her husband to speak for her, but when her daughter Rachel was 9, Lisa’s marriage broke down. Without her husband speaking for both of them, Lisa lost a vital source of support.

“I chose a job as a typist, thinking I wouldn’t have to speak but it was very stressful. I still remember it vividly, travelling in on the bus was an ordeal in itself because I couldn’t say where I wanted to go. I often had to write it down on paper or get a bus pass in advance so I could show the driver. I sometimes got off earlier at a stop that I could say and walked the rest of the way.

“Unfortunately, my marriage broke down and I depended a lot on him to do the speaking, everyday jobs like ringing the school, the garage etc. It was then just me and my daughter and I did struggle with the question of how I could bring her up successfully, if for example I couldn’t get on a bus, never mind parents evening and things like that. That was probably the lowest point for me. I had no-one to rely on to speak for me, but I wanted to do the best I could as a mother.”

At a particularly low point, Lisa reached out to Samaritans by email. 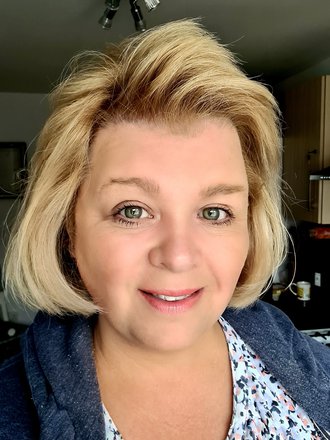 It helped massively because it was communication I could do, which is why I love the fact that there are different ways for people to communicate

Inspired to try and overcome her stammer for her daughter, Lisa joined the McGuire programme, an intensive course run by people who stammer. During the first course they set her the challenge of speaking to 100 strangers in Newcastle City Centre on a Saturday afternoon. From here, her confidence blossomed, and she openly discussed her stammer with friends and colleagues for the first time.

In 2019, Lisa signed up as a Samaritans listening volunteer in her local Northumbria branch, to give back and help those who are struggling in similar situations.

“I’ve gone from being really a bit of a loner and literally never leaving the house to wanting to do everything and anything. I love doing things and getting out which is why Samaritans feels so special.

“I think support is one of the biggest things in overcoming mental health issues, that feeling of not being on your own.”

I love the fact that people are brave enough to contact us, I don’t take that for granted at all. It’s a huge step and an amazingly brave one

We want everyone who needs us to be able to get support in a way that’s right for them. Online chat will make it possible for anyone who feels unable to speak on the phone to have a conversation with one of our listening volunteers by typing a message on their phone and receiving messages back in real time.

Emma is one of our volunteers who took part in the initial online chat series of pilots and her branch has been involved in the trials ever since. Anonymous feedback* provided by people who have used our online chat service during its ongoing series of pilots show that the service is reaching more people who are struggling to cope, including those who have never contacted us before and those who say they would not have contacted us any other way. 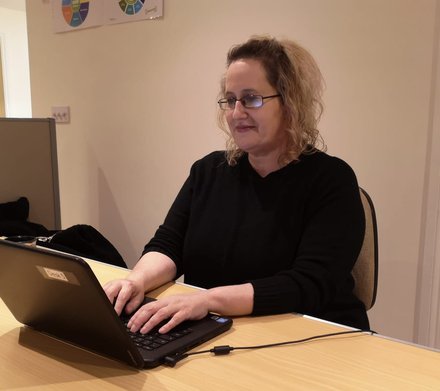 For me it has been such an exciting development in my life as a Samaritan. We are still listening - just typing instead of talking.

“As life changes, so do the methods of communication available to us. We as an organisation need to keep up with the times especially now with so many people being ‘stuck at home’.”

Generally, we’re all emailing, texting and messaging more, while making fewer voice calls. This is particularly true of young people who have grown up around mobiles and tablets. Young people are just one of the at-risk groups who we urgently need to reach. Suicide is the biggest cause of death of young people aged 20-34 and suicide rates have been increasing among 15-19 year-olds.

“It is not always easy to speak on the phone; sometimes people do not know what to say, struggle to speak about how they are feeling, and cannot guarantee they will not be disturbed mid-conversation.

“I think there are so many different situations as to why a person might choose online chat. I think primarily for the younger generation it is their only form of communication – they could be sitting on a sofa with their family and messaging us, and nobody would know, as it is probably normal behaviour for them anyway. But this could also be the case for an older person; they may not be able to talk as they have kids around, or partners, and again when people do spend so much time on their phones, nobody else needs to know who they are messaging.”

I can only imagine that when this [service] is advertised and becomes part of our normal duties, it is going to be busier than ever.

By supporting Samaritans with a monthly donation, you’re helping make sure we’re there to listen, when someone needs us most, however they choose to speak.

Online chat callers were invited to complete an anonymous survey after talking to a Samaritan. Between 10 October 2020 and 10 November 2020, 147 callers left feedback. As the feedback is optional, it’s not a representative sample of the 1700+ chats taken so far, but it does tell us about the experiences of some of the people who are using the service.